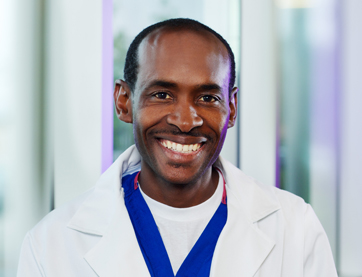 Baylor Scott & White Texas Spine and Joint Hospital
Bio
Dr. Redmond is a neurosurgeon, specializing in brain and spine surgeries, with particular emphasis on pain management. Growing up on an island with limited resources was a challenge but with encouragement from family and friends, he pursued his call to medicine: first at a small research institute on St. Kitts, and then to study abroad in the US via a scholarship, where he ultimately transferred to Yale. There he completed his undergraduate degree, as well as his medical and surgical training.

“We’re moving away from spinal hardware into the exciting area of cellular and genetic treatment for brain and spine disorders.”

Degrees and Education
Dr. Redmond received his medical degree (M.D.) in 2002 from Yale School of Medicine. He interned and completed his residency in General Surgery at Yale-New Haven Medical center from 2002 – 2009.

Awards and Appointments
Andy J. Redmond‘s, M.D. is a member of the American Association of Neurological Surgeons, Joint Section on Tumors. He received the St. Kitts Biomedical Research Foundation Scholarship in 1993 and was on the Dean’s Distinguished List for Academic Achievement in 1994.